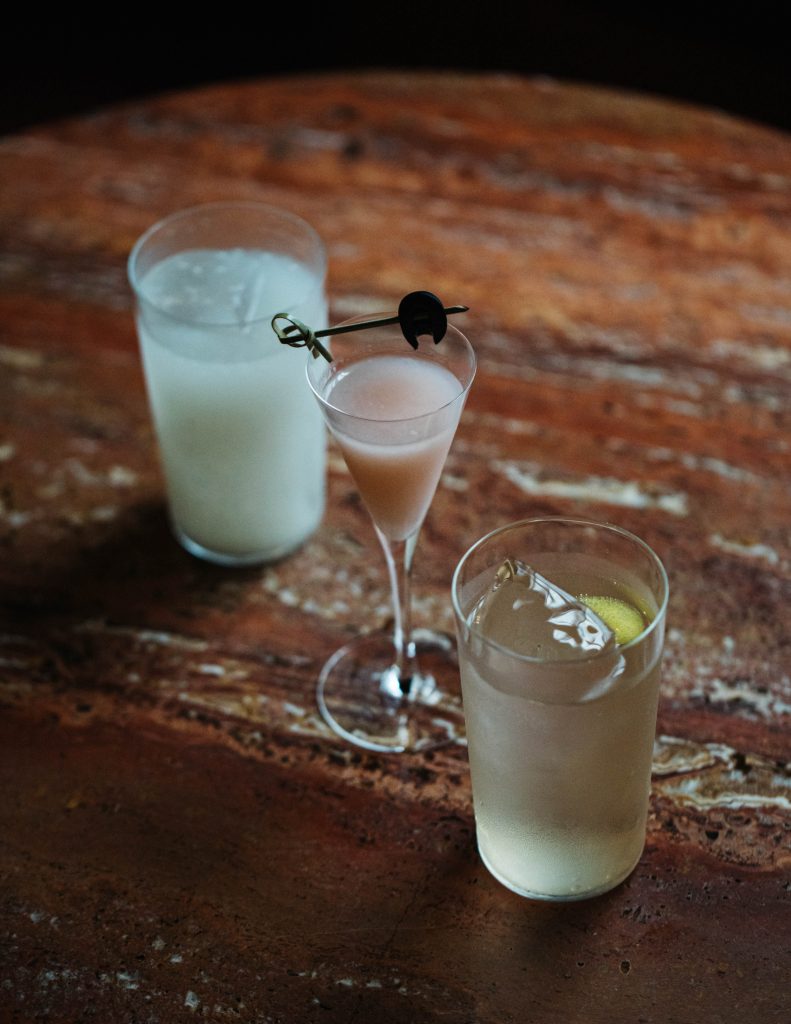 #Ao , #DialogueOfFood , #Ao , #K5
How is a particular dish or drink created? By unraveling a restaurant’s signature you reveal the chef's personality and philosophy, their commitment to the ingredients, and even the attitude of the producers. Exploring the story behind the cuisine, the dots that shape Kabutocho turn into lines that connect them. The second installment of "Dialogue of Food" focuses on cocktails from Ao.

Ao, a library bar produced by Kai Tanaka and Soran Nomura, is located inside K5 and serves cocktails that draw inspiration from the life of Shibusawa Eiichi.

“Shun Kim, who is in charge of the bar’s operation, is a Shibusawa Eiichi enthusiast, having already read his autobiography. He is also responsible for book selection and curation. He picks up stories from Eiichi Shibusawa’s life and plays with the words to create new ideas for cocktails. Then, Nomura expands on those ideas and images to create the drinks,” said bartender Shiho Kawashima. The menu was renewed in October last year, with a structure that allows customers to better enjoy the stories of Kabutocho and Eiichi Shibusawa.

Eiichi Shibusawa was born into a wealthy farming family in Saitama Prefecture. There were several other Shibusawa families in the village, and so Eiichi’s was referred to as the ‘middle house’. Taking inspiration from this, the cocktail has a refreshing flavor that is best enjoyed during the day. “The base rum is a combination of Karaki, a type of cinnamon that Soran discovered during his travels to Okinawa and cold brewed hojicha tea (grown using natural farming methods in Miyazaki Prefecture), millet sugar syrup, carbonated water, and a Greek wine called Kourtaki Retsina of Attica. Since it’s a midday drink, it’s light enough to drink during the day.”

Eiichi Shibusawa somehow became a vassal of Yoshinobu Hitotsubashi (aka Tokugawa Yoshinobu) of the Shogunate, which he supposedly tried to overthrow after the uprising plan was canceled. He continued to admire Yoshinobu even after the Meiji era had ended. This cocktail was created by combining the keyword Shogun with the cocktail ‘Sidecar’. The cocktail is served with a Yakishime ceramic produced by artist Akihiro Nikaido, whom Soran met at Omotesando GYRE. “The idea came from an event that Soran once organized in which he used old and aged liqueurs. These are then combined with ‘Denki Bran’ and aged Bancha tea. Most of our tea leaves are sourced through Ai Hasegawa of ‘norm’, and these are from a tea plantation in Fujieda, Shizuoka Prefecture. We also add cinnamon ginger syrup and lemon juice to it and shake it up. The syrup is also homemade, made by boiling ginger and sugar sans water, and all the herbal medicines are sourced from Sugimoto Pharmacy in Kamakura. Once the cocktail is in the vessel, mezcal is poured on top. This allows the aroma of the mezcal to rise first. Since we use earthenware vessels, we wanted people to be able to taste the uniquely earthy, smoky aroma.” The mezcal is made by hand in Mexico and has an earthy, steam-baked taste, while the Japanese handcrafted vessels have a rugged appearance. The harmony between the two is a profound experience.

In 1867, Eiichi Shibusawa, who was to accompany the Paris Exposition, sailed to France on the ship Alphée. He ate butter and ham on the ship, and wrote, “The taste is extremely beautiful” in his journal. This cocktail was inspired by the Alphée, which is said to have been a red ship, and was created with multiple layers of red. A tea from Tokunoshima, Kagoshima Prefecture called Sun Rouge, purchased from Sakurai Roasting Tea Research Institute, turns red in reaction to acidity. Hoshiko Umeshu (plum wine), well known among plum wine lovers, reacts with the Sun Rouge tea leaves to enhance the redness. Umeshu is usually around 20% alcohol, but Hoshiko Umeshu, which is made with vodka, is 40%. It is made by bartenders, so it’s refreshing, easy to drink, and easy to turn into a cocktail. We also add butter to the base, Calvados, and keep it in the freezer. “Calvados is 40%, so it doesn’t freeze, but the butter does. So by removing the butter solids, I can add a buttery flavor to the Calvados. You can’t taste the butter, but it leaves a slight milky taste. Here we add vodka and cherry filling flavored with extracts of wolfberries. We add sweetness to the Calvados, which has a strong oaky taste, to make it a refreshing drink, so if you like highballs, you’ll be hooked!”

Ingredients can be vacuumed or cooked at low temperatures or flavored using chemical reactions between oil and alcohol. It’s not just a combination of alcohol and liquor; each ingredient is carefully crafted and selected based on experience, logic, and sense. Knowing the story locked inside each glass makes the cocktails all the more delicious. In the future, the bar plans to offer three limited edition cocktails per month. The September cocktails, created by the bartenders, included one drink based on Doburoku from the Heiwa Doburoku Kabutocho Brewery, which opened this June. Another, titled “End of Summer, Beginning of Autumn Sour,” is made from Japanese pear, green chili, myoga, and fennel and then mixed with shochu and carbonated water. Refreshing and perfect for early autumn. Cocktails that remind you of the season are not to be missed. 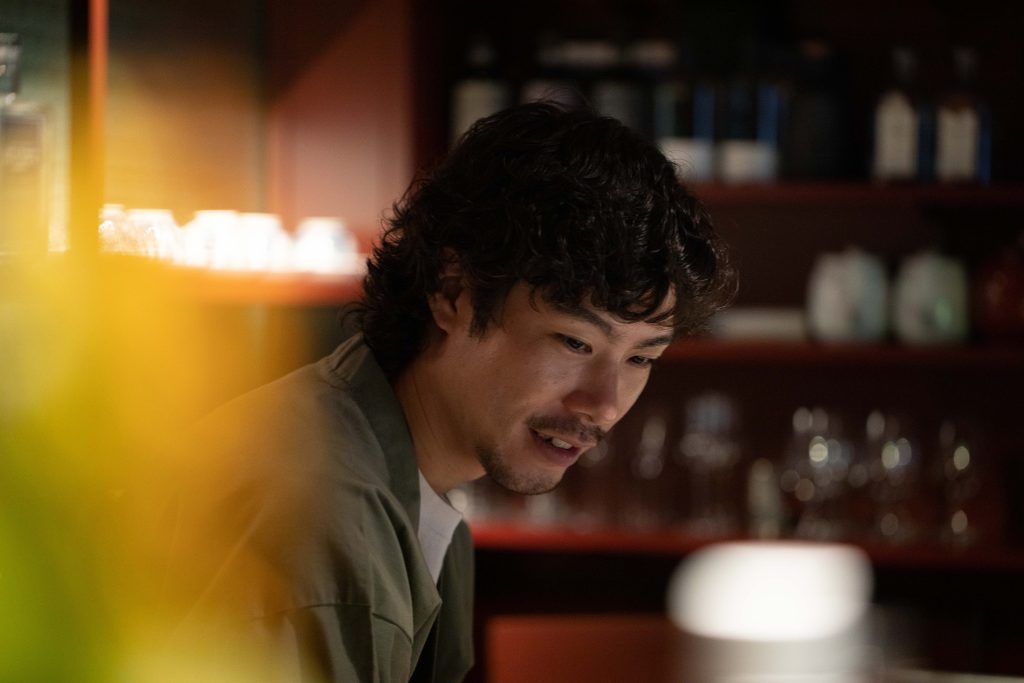 Born in Nagano, Japan in 1995. He moved to Tokyo at the age of 18 to work part-time in a bar. Then at the age of 21, he moved to Australia. After working in bars in Melbourne, Perth, and Sydney for two years, he worked as a bartender on a cruise ship. He returned to Japan in December 2019 and was introduced to Kai Tanaka by a friend who worked in Melbourne. He’s worked at Ao since its inception. His hobbies are photography and bouldering.