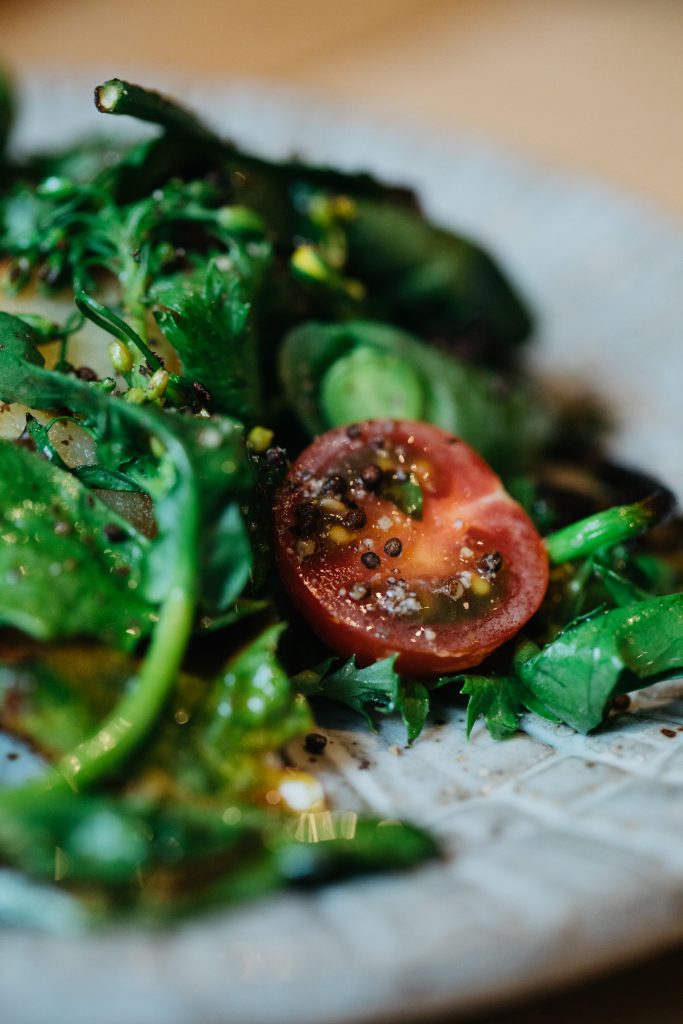 #caveman , #DialogueOfFood
How is a particular dish or drink created? By unraveling a restaurant’s signature you reveal the chef's personality and philosophy, their commitment to the ingredients, and even the attitude of the producers. Exploring the story behind the cuisine, the dots that shape Kabutocho turn into lines that connect them. The first installment of "Dialogue of Food" is a feature on the full breakfast at caveman.

Caveman is located on the first floor of K5. The restaurant takes inspiration from a diverse mix of cultures, including Japanese, French, and Danish. The restaurant provides diners with a sense of discovery thanks to its modern take on cooking that is not limited by nationality or genre. In addition to lunch and dinner courses, the restaurant also offers a breakfast menu.
We asked manager Mr. Hiroki Morimoto and sous chef Mr. Toshi about its breakfast menu.

The breakfast course (¥3,850 including tax) includes warm potage, a fresh vegetable salad, homemade sausage, assorted bread, waffles, and a drink. This breakfast menu, both filling and highly praised, was created by Toshi, the sous chef of caveman.

“The full breakfast was initially created for guests staying at K5. It was a challenge to come up with a breakfast menu that was different in taste from the lunch and dinner courses at caveman. We source seasonal vegetables from organic farmers with whom we have a relationship, and we place an importance on keeping it simple and bringing out the flavors of the natural ingredients, which is also the same process we undertook to create the lunch and dinner menus. Also, we make the sausages and bread from scratch, so we put a lot of time and effort into it. The sourdough bread, in particular, is made to our original recipe and is the star of the breakfast.”

“The carrots are mainly grown by Rei Yasuda in Tsumagoi Village, Gunma Prefecture. He’s a 29-year-old farmer from Tokyo who moved to Tsumagoi Village four years ago and runs an organic farm. He’s an interesting guy, and we all get along well. Once, he got pretty drunk at the opening party of K5. It was a pretty rough night! And the ‘ezo-shika’ (deer) for the evening’s dish came from a girl who hunts in Hokkaido, and caveman also sources a lot of ingredients from producers of the same generation who have been with us since our Kabi days.” The carrots, concentrated in flavor, are made into a rich soup and served with salmon marinated in salt and chamomile and a poached egg. It is served warm, with a side of bread, perfect for dipping.

This salad features seasonal vegetables such as new potatoes, wasabi greens, and tomatoes that have been lightly cooked to bring out their flavor. Underneath lies a spread of herb and cream cheese sauce with a hint of black pepper. “Most of the vegetables are from Yamanashi Prefecture. Today’s salad is made with seasonal organic vegetables from Crazy Farm in Hokuto City and Kitayama Farm located at the foot of Mt. Fuji. The herbs come from a herb stand in Hokuto City. Caveman members regularly visit the herb stand for training and the herb stand has hosted a pop-up at K5. The herbs are grown without pesticides and are aromatic and flavorful.”

The homemade sausages are freshly made. The sausage is mixed with seven to ten different herbs (from the herb stand), to give it a light and refreshing taste.
“I wanted to make big sausages that reminded me of those we often ate in Canada, where I was brought up,” says Toshi. “I wanted it to be hearty but not heavy, so I used a lot of herbs to make it light. In addition to basil and Italian parsley, I also mixed in kaffir lime leaves, which are often used in Thai cuisine, to add an oriental flavor. The idea for an egg yolk and herb sauce came to me while I was having fried eggs for breakfast.”

There are always about three kinds of homemade bread available, all made from original recipes using sourdough. “We use sourdough fermented with natural yeast, which gives it a slightly sour taste. The sourdough is either a starter made by adding flour and water and fermenting it, or a raisin starter made by fermenting raisins, but at caveman, we use a combination of both starters. This gives the yeast more strength and makes the bread fluffy and light. It’s our baker’s unique creation, so you won’t see it in other restaurants. The fermented butter, made by aging buttermilk and cream for 10 hours, is also a fan favorite.”

Last but not least, waffles with maple syrup and sour cream. The drinks available include coffee from Switch Coffee, Japanese black tea from Sakurai Roasted Tea Laboratory, orange juice, and kombucha. The full breakfast was originally exclusive to K5 guests, but from April onwards, reservations are now open to everyone. The breakfast at caveman is a great way to relax and enjoy the morning hours in Kabutocho while experiencing the restaurant’s philosophy of cooking and attention to detail. 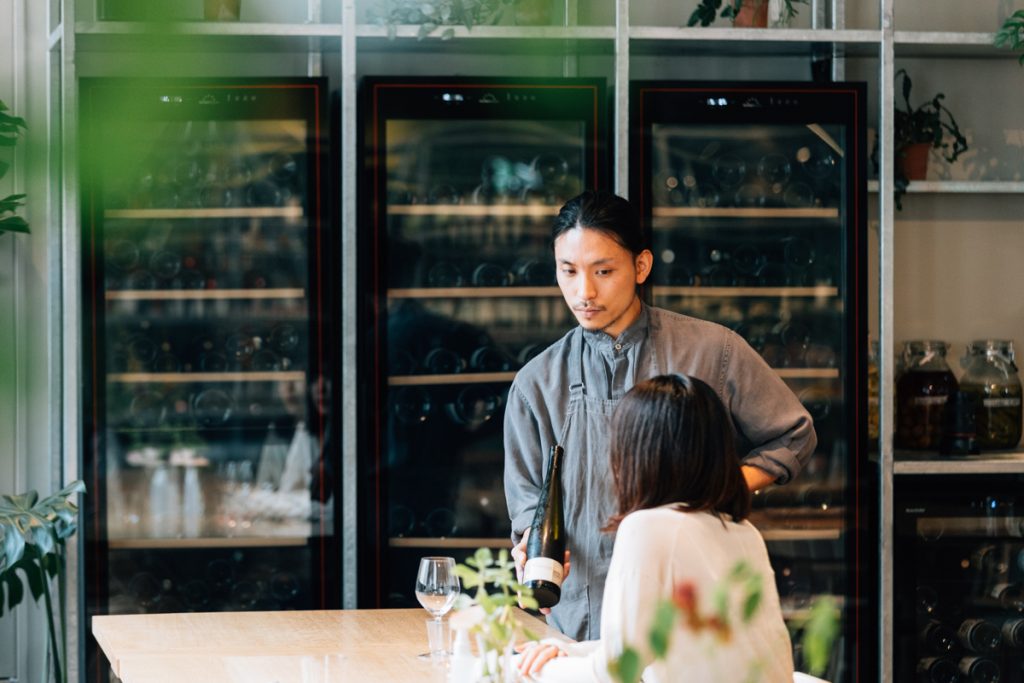 Born in 1989 in Osaka. While a student at Tenri University, he met a teacher who inspired him to become a teacher himself. After working as a bartender and restaurant manager, he passed the sommelier exam and became a sommelier. He then gained experience as a sommelier at Asia’s No. 1 restaurant “Gaggan,” and upon returning to Japan, he joined caveman. Currently, he is not only working as a sommelier but also as the restaurant’s manager. 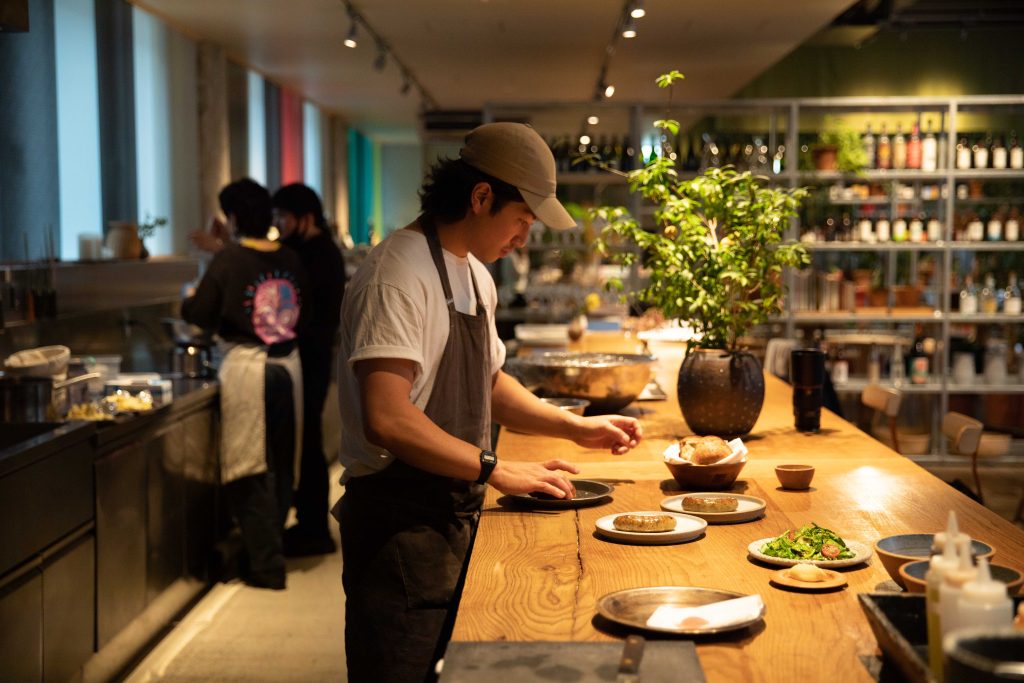 Born in 1994 in Canada, he began his career as a chef in Vancouver. He later gained experience at “Town Mouse” in Melbourne and “kabi” in Meguro, Tokyo, and also among other popular restaurants in London. In 2021, he returned to Tokyo to become sous chef at caveman. His favorite cuisine is Vietnamese, and he enjoys bouldering on his days off.