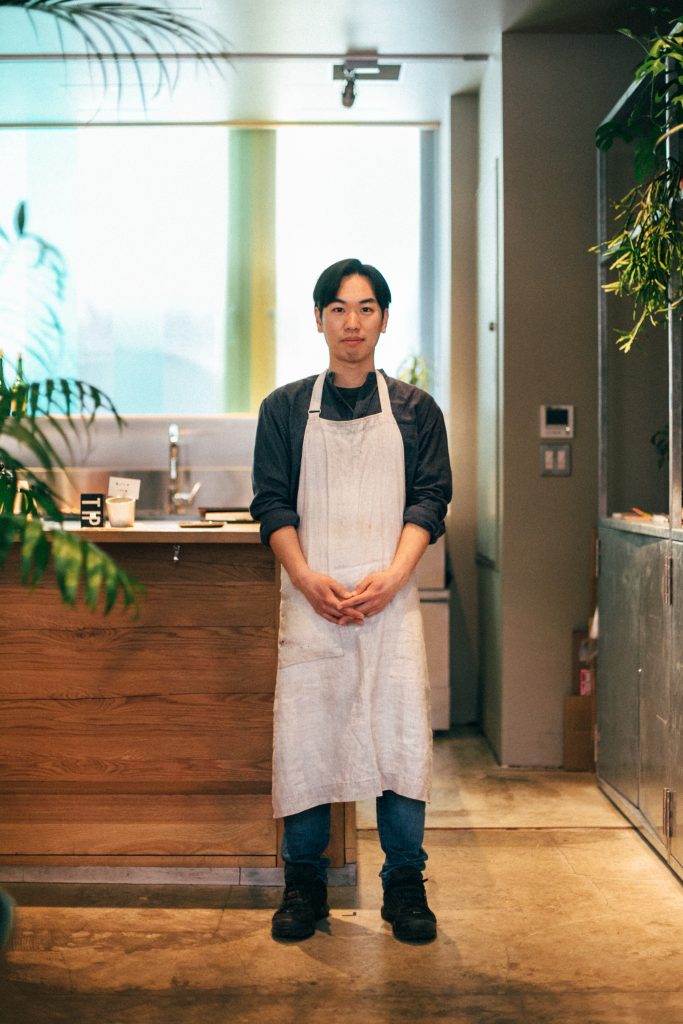 Let the coffee lead you.
A life in motion.

#SwitchCoffee , #K5 , #Color
Yuya Kawara, began his career in coffee whilst living in Australia. Currently he works as a barista for Switch Coffee in K5 Hotel, but started his gastronomy career as a chef. Yuya feels blessed being able to always land a job in coffee, whether in Australia or in Japan, as if he was guided by the coffee gods!

●Where is your hometown?
I grew up in Wakasa Town in Fukui Prefecture, near Shiga and Kyoto, but left my parents’ home when I was 15 years old.

●You left your hometown at a young age, didn’t you? What was your motivation?
I’ve always sought excitement in my life, so I decided to go to high school in Nagoya and left my hometown. I lived in a dormitory for the first two years of high school, and then lived alone for the last year.

●When you were a student, was there anything that you were passionate about?
In junior high school, I did judo. People often tell me they find that surprising, but I actually have a black belt! By learning judo I was able to learn politeness and I think that was a really good thing for me. In high school, I was more focused on music activities.

●What kind of music were you playing?
Heavy metal. I formed a band with my friends, I played guitar and we would play live once a month. I had always liked X JAPAN, but after listening to Japanese metal, blues and jazz, I ended up moving more towards heavy metal.

●After blues and jazz, heavy metal?
Heavy metal also has its roots in blues. In Japan, a lot of metal-like songs are surprisingly enka. It’s a derivative of blues, or a minor song, but it’s intense.

●What is the appeal of heavy metal?
I think it’s the fact that it’s fast paced. It’s more of a thumping, bass-heavy sound. I continued playing music for a while after graduating from high school, about four years in total. My goal was to turn it into something professional, but it didn’t work out (laughs). I couldn’t make a living with just music, so I worked part-time at a restaurant.

●What kind of restaurant did you work at?
I worked part-time at a Korean restaurant and then an Italian restaurant in Nagoya until I was 20 years old, and then I decided that I wanted to get serious about my culinary training, so I came to Tokyo.

●What made you want to learn how to cook?
I’ve always liked eating and cooking, so when I quit music, I thought cooking would be nice. I thought it would be nice to improve my cooking skills, serve delicious food, and make customers happy.

●How much culinary training did you have?
At first, I trained at an Italian restaurant for about two years. It was a battlefield in the kitchen! I was beaten with pots and pans. … I think such environments are less common nowadays, but I quit because I thought I would be in trouble if I continued down that path. After that, I joined a French restaurant and started learning all over again. I was there for about two years.

Coffee is something that is made and given one cup at a time in an open space. The short conversations I had with customers during that time gave me a sense of elation.

●Why did you decide to work in coffee when you were on the culinary path?
When I was working at this French restaurant, a barista friend of mine took me to a coffee stand. It was the first time I drank specialty coffee and it was so sweet and delicious. After that, I was hooked on coffee and on my days of started going to other coffee shops like ONIBUS COFFEE (*1). But I was always in the kitchen of the restaurant so I didn’t really get to meet many people. I had been working in the kitchen for such a long time and felt a bit isolated, so I started thinking that coffee was a job where I could meet more people and get to know them better.

※１ ONIBUS COFFEE
They have shops in Nakameguro, Okusawa, and Yakumo and serve coffee with care, paying particular attention to the origin, roasting, and brewing method.

●The kitchen is a closed world, isn’t it?
Yeah, that’s true. Living in the kitchen from morning to night and going to bed when I got home, I was starved for human contact. Coffee is something that is made and given one cup at a time in an open space. The short conversations I had with customers during that time gave me a sense of elation. I’ve never been good at talking to people, but now that I’m working in coffee, I’m not that shy anymore.

●What coffee shop did you work at first?
I worked at Sarutahiko Coffee in Ebisu for about a year. However, there were many employees and the demand for coffee itself was low, so I couldn’t gain much experience. Then, one day, there was a guest barista from Australia at About Life Coffee Brewers (*2) in Shibuya. I was impressed by the espresso he made, which was completely different from anything I had ever drunk before. The sweetness and balance were different, and it tasted a bit like tea. …… I was shocked! Thinking that it would be difficult to gain much experience in Japan I decided to move to Australia to try to get a job in coffee. I saved up and moved to Australia two years later.

※２ About Life Coffee Brewers
A coffee store is located in Dogenzaka, Shibuya, and is an affiliate of ONIBUS COFFEE.

●Where in Australia did you go?
Sydney. I hadn’t studied English, so I could only say yes, no, and thank you (laughs). I was in Australia for about two and a half years, first on a working holiday and then on a student visa. I looked for jobs while attending a language school, but I couldn’t find any at first.

●How did you find a place to work?
I’d been drinking at lots of different places, hoping to work in a place that served the kind of coffee I liked, when one day, the owner of Edition Coffee Roasters asked me if I would like to open a small coffee shop together. It’s a big place with three branches in Sydney, serving Scandinavian and Japanese food and coffee. I was told “You don’t need to speak English, just make the espresso!” but after about a month of working there, I was told I was a little slow at making coffee.

●What happened when you were told you were making coffee too slow?
Edition Coffee Roasters introduced me to another shop, The Little Marionette Roastery & Espresso Bar, in the suburbs. They sent me there so I could learn how to make better coffee and also improve my English.

●How long did you train there?
About six months. It was nice and relaxing in the suburbs, but it was an old style place that served strong, darker-roast coffee. So for me it felt not that different from coffee in Japan.
At that time, Mecca Coffee, a place I used to frequent on my days off, asked me to join them as they needed more packing staff.

●I guess when you get a job just by going around and drinking coffee, it must mean that the coffee Gods love you!
Yes (laughs). I’ve never gone to an interview in Australia with a CV. I don’t know if I would have found a job if I had been in Melbourne, or if it was just because I was in Sydney.

●Mecca Coffee’s packaging and interior looks very modern.
It’s one of the top three or four largest roasters in Sydney, and I loved it. Mecca Coffee is still at the heart of what I do. If I hadn’t worked there, I might not have continued to make coffee. The environment and people were great, and I learnt everything about coffee from buying beans, to roasting and distributing to cafes.

●Does this mean that you are now able to see the coffee business from a bird’s eye view?
That’s right. In Australia, there is a basic division of roles between barista, roaster and production manager, but I ended up being the dispatch manager and roasting. I was trained not only in roasting, but also in the background of coffee production, from buying beans to sourcing and cultivation.

●Didn’t you want to stay and work at the shop you love?
I worked at Mecca Coffee for about two years and then I had to leave because of my visa. If I could have stayed, I would have. But I’m happy now!

●When you came back to Japan, did you ever want to open your own shop?
At first I wanted to open my own shop like Mecca Coffee, but I had just come back to Japan and didn’t have the money, so I started working for About Life Coffee Brewers. As I got to know the Japanese coffee market, I started to realise that it might be difficult to do it on my own because the number of coffee shops is increasing, but the amount of coffee consumed is not.

I think stability is the most important thing in order to always provide the same taste and service.

●Is there anything you do to maintain stability?
Not really (laughs). But I’m also not the type of person who changes their mood often. I try to do what I like on my days off. I go bass fishing or make pottery.

●I heard that you got married. Do you fish and make ceramics with your wife?
Yes, my wife is Russian, and she is actually the first person I met on Tinder (laughs). We don’t do fishing or do pottery together, but we do go to the movies, go cycling, and cook together.

●What do you think about the future?
I am interested in the concept of a dual life. My wife is currently working in Japan, but her family is in Russia, and I think she would like to return there someday. With that in mind, I think it would be great to live somewhere between Russia and Japan.

●What kind of presence do you want Switch Coffee to have in Kabutocho, where there were originally no coffee shops?
Switch Coffee is open early in the morning and closes early in the evening. I want it to be a place where people can start their day. Whether they are staying in the hotel or visiting from another part of Tokyo. 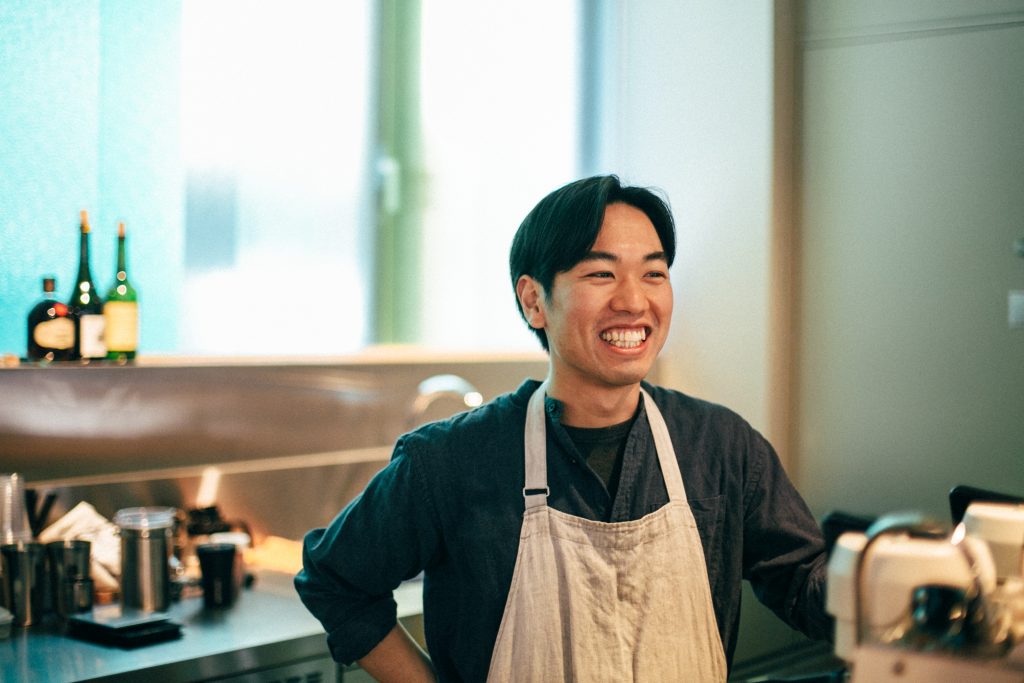 Born in Fukui Prefecture in 1990. After training as a chef, he decided to pursue coffee and moved to Australia. Since 2020, he has been working as a barista at Switch Coffee, which opened inside K5 Hotel.

Mr. Okura (K5 PR Director) is probably our most frequent customer! I often work with him to produce interviews, but I’d like to hear more about what he does.