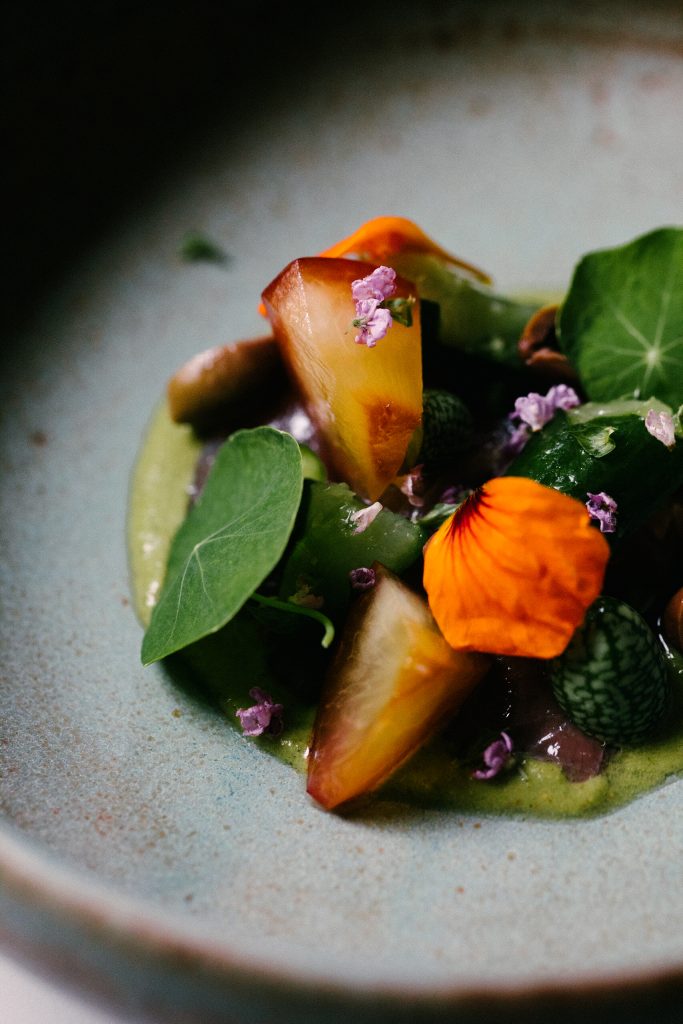 #Neki , #DialogueOfFood , #Neki
How is a particular dish or drink created? By unraveling a restaurant’s signature you reveal the chef's personality and philosophy, their commitment to the ingredients, and even the attitude of the producers. Exploring the story behind the cuisine, the dots that shape Kabutocho turn into lines that connect them.

Kyohei Nishi, former chef at two-star restaurants and Bistro Rosiura, is the founder of popular bistro, Neki, in Kabutocho. The restaurant serves light French-style cuisine using seasonal ingredients selected from all over Japan. “I think of French cuisine in a broad sense as free-flowing, so I combine this with Japanese ingredients and techniques. I think the balance between Japanese and Western ingredients is what makes Neki special,” says Nishi. Sous chefs Takamatsu and Hirai, who have been with the restaurant since day one, alongside the rest of the kitchen, create the lunch courses, which give restaurant-goers a casual way to enjoy Neki’s unique cuisine.

The lunch course (¥6,000 incl. tax) includes soup, bread from ‘Beaver Bread’ bakery and features the choice of two fish dishes or one meat dish, which is then followed by dessert, and small pastries. The menu changes with the seasons, with wine pairings (¥3,300 incl. tax) also available.

Neki’s signature dish is based on French cuisine but uses Japanese techniques, which can be seen in the kobujime (kelp-marinade) yellowtail. “My great-grandfather, Nishi Otomatsu, was also a chef and once published a book titled ‘Taste is the Game: Delicious Old Kyoto Cooking’. My father is also a chef, actually, my whole family are chefs! I have no formal training in Japanese cuisine, but I studied from my great-grandfather’s books for a long time, so Japanese techniques are ingrained in my body.” Seafood is often brought in from Ishikawa, Kochi, and Chiba prefectures. “For example, I was introduced to Kuwabara who owns a store in Ishikawa Prefecture by Shin (Shinichi Takahashi) of the wine shop ‘Human Nature’. He goes to the market every morning to buy fish, and calls me at 5:00 a.m. saying, ‘we have this fish today’. If I don’t reply right away, they sell out, so I can’t sleep in!” Cucumber, shiso leaves, shiso, and other Japanese ingredients are used to create a gazpacho-like dish. The pickled plums add an accent.

Today’s fresh fish is sea bass imported directly from Ishikawa Prefecture. “The staff wanted to serve something that would bring out the flavor of the ingredients, as sea bass is a delicate fish. After much trial and error, we decided to use a beurre blanc sauce as a base and add yuzu kosho (Japanese pepper) to give a Japanese essence to a French dish”. Summer vegetables, such as okra and mohair come from Kitayama Farm in Shizuoka. The vegetables have a sticky texture and are refreshing. “Kitayama Farm has a wide variety of wildflowers which are grown organically without pesticides. ‘caveman’ also purchases from this farm I think. We have to visit them in person to purchase their products, and several kitchen members visited them recently. Other times, we purchase vegetables from Nakazato Farm in Kochi, which was introduced to us by an acquaintance from my time at Bistro Rojiura. I often get introduced to producers this way, and when the timing is right, I visit them. If someone says, ‘So, there’s this person…’ I get curious!”

The Tsugaru duck has a light yet delicious flavor. “I sourced the duck from my hometown of Kameoka in Kyoto, and all the other meat we serve is sourced from Japan. Recently, I visited the Miyazaki region where Miyazaki’s Toman beef is produced. It’s a black Wagyu beef, but the way it’s raised is ingenious. The meat is lean and firm with a great taste. When you actually visit the place of origin, you realize that the taste of the meat changes completely depending on the feed and the environment in which the beef is raised.” The duck is served with green eggplant, burrata cheese, and figs from Kitayama Farm in Shizuoka. At Neki, fruit is a staple ingredient. “We serve it as it is or sometimes we ferment it and we always ask farmers to send us their seasonal fruits if they have any. By the way, my father-in-law also grows blueberries in Chiba.”

The final dessert is a peach compote with ice cream, jus, and oil. Neki’s style is to look at the overall composition of the dish, whilst also considering the balance between mains and dessert. The team was instructed that lightness was an important keyword for the lunch course dessert, so it was changed from the original menu.

The lunch courses are served in a light and comfortable atmosphere. Ingredients are selected from across Japan, using local techniques with French influence. The seasonal dishes, created by the talented kitchen staff, are sure to surprise you no matter how many times you visit. 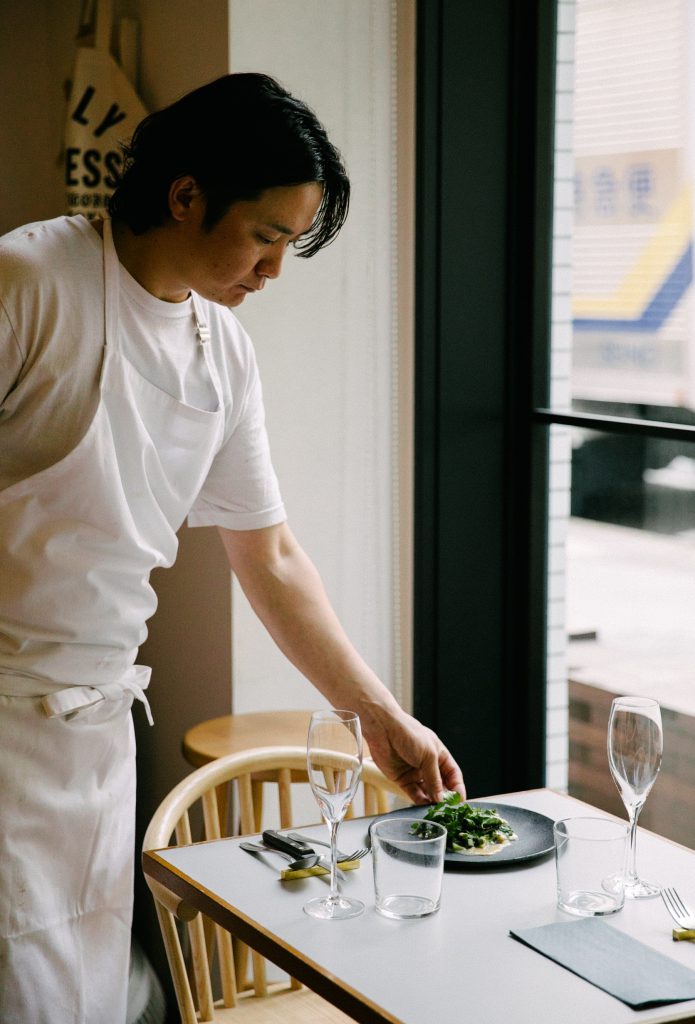 Born in Kyoto in 1983. After training at a hotel in Kyoto, he traveled to France to work at an Auberge in Alsace before returning to Japan. After working at the two-star restaurant Cuisine Michel Troisgros, he went on to become the chef at the well-known restaurant, Bistro Rojiura, in Shibuya. In May 2020 he opened his own restaurant, Neki, in Nihonbashi Kabutocho, followed by its sister restaurant Songbook in Setagaya Daita in November 2022. 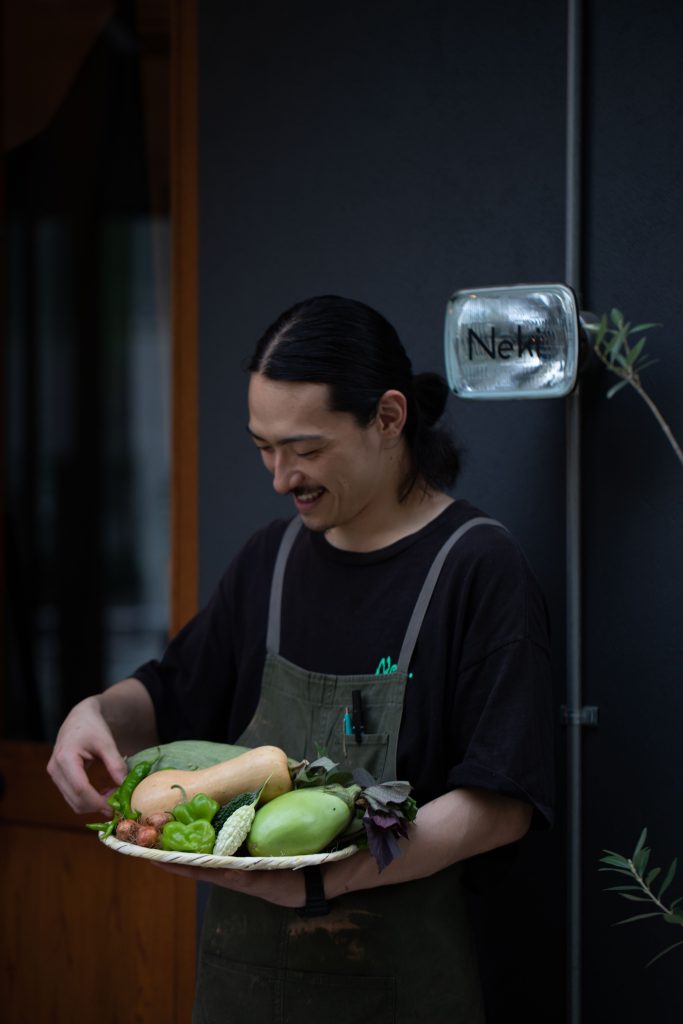 Born in Hyogo in 1994. Began his culinary career at Izakaya Tanigaki, a bar and restaurant using local ingredients. He met Nishi at a collaboration event between Bistro Rojiura and Izakaya Tanigaki. Interested in French cuisine, he moved to Tokyo when Neki opened. He has been exposed to a wide variety of ingredients, and creates dishes every day with a sense of seasonality and individuality.